I am a SOTA Chaser - First 6 Points today! 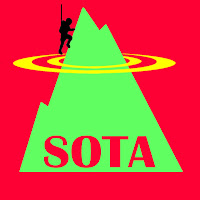 I have been interested in SOTA for some time, but living smack dab in the middle of Kansas severely limits my ability to be an activator.  I have found several summits over in Missourri that could be done in a one day activation - but my schedule won't allow that right now.

So at lunch today I headed over to the park - it was HOT!  My car themometer was reading 90 deg when I rolled the windows down and turned off the car.

I tuned around 20 meters - at first there was not much activity.  I heard a few QSO's underway.  Called CQ a few times around 14.060 with no takers.

Then I tuned back around 14.060 and heard a QRZ followed by an almost contest style series of exchanges.  The speed was a bit to fast for me, but I was able to make out most of his call and the word SOTA.  After he called CQ one time, I replied "QRS de N0HYD".  After a couple seconds NS7P returned with at a nice pace that I could easily copy.  He gave me a 559 and I gave him a 559 right back.

Phil was on W7O/CM-033 which was good for my first 6 points as a SOTA Chaser! What fun that was!

Next Wednesday I am heading to H. Roe Bartle Scout Reservation to spend a few days with my oldest son at Boy Scout Camp. I really want to take along an antenna that is multi-band, and I would like the same type of antenna for my lunchtime portable operations.

So this weekend I am going to build one of the EARCHI 40-6 meter end fed antennas.  I think I am going to wire tie the matching box to the bottom of the 31' Jackite pole and also put a couple clips to wind the vertical wire to when not in use.  A simple self contained multi-band antenna!  I will bungee this to my tent poles at the camp and be able to operate when I have free time.

Thats the adventures from my part of the world today!
Posted by Burke Jones - N0HYD at 2:05 PM