SOTA Update & a strange one... 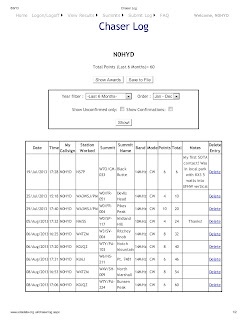 Right now I am sitting at 60 points on my way to 100 so that I can claim the Shack Sloth award as a chaser!

This is where things got a bit strange....after not seeing any other spots on SOTA GOAT, I decided to call CQ on 20 meters.  After calling about 6 times a station comes back to me.

I copied his call as W6VZ - and then a bunch of letters that really didn't make sense.  He also had something wrong with his keyer, because sometime it would just send a long string of DAH's.  I asked him what the letters were after his call and he repeated BIZ BIZ.  He said his name was Howard and he was in TN.  Each time he sent his call he would add BIZ to the end of it.

So I did a quick search after the QSO and W6VZ is not named Howard.  So then I thought maybe his call was WB4BIZ (similar CW) - but that was not Howard either.

This maybe one that I just not ever figure out!  If any of you out there know what this might be, let me know - I am stumped.